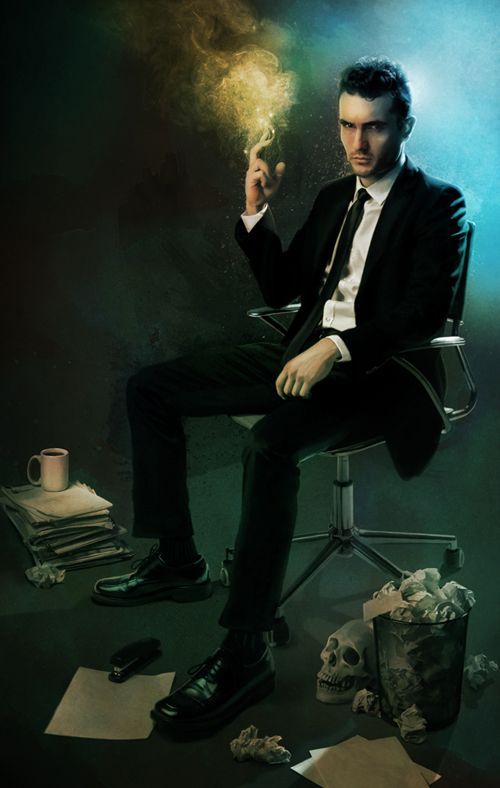 They say that magic is dead. It’s a convenient fiction, is magic — a quaint artifact of a history that never existed, a fairy tale. Unicorns and dragons, magic swords and ancient tomes are all just children’s stories. Nobody believes in any of it. You’ve stumbled through your life with the belief that this is an orderly, rational world, that science can explain everything and that myths and fairy tales are for children. You’ve worn blinders put on you by a hundred years of engineered history. Everybody buys into it and if you don’t, you’re a crank, a psycho or a crystal-waver. The problem is, that’s just the world people buy because it’s safe. It’s orderly and mundane and everything’s explainable. Everyone can get fast food and a boring job without worrying about crazy things like demons or magic spells.

You’re different. You thought you were insane when you looked out tonight and saw what was really going on, right? That incessant pressure in your head had to be a tumor and you were just hallucinating — that’s it. Convenient way to avoid the idea that maybe your sudden recognition of magic is really a sudden awareness of the truth that’s been hidden all of your life.

Yeah, magic. The world is full of it. Everything from neo-Pagan rituals to kung fu fightin’ to bleeding-edge weird science makes its mark on this world. Unlike the days of yore, though, it’s quiet, it’s subtle, and it’s carefully hidden from the eyes of normal people. We open our eyes to a world where we can make our own rules and choose for ourselves what we want to believe in. We Awaken to the magic that’s been hiding in plain sight.

Once you believe, you’ll see it all the time.

I'm sorry, but we no longer support this web browser. Please upgrade your browser or install Chrome or Firefox to enjoy the full functionality of this site.